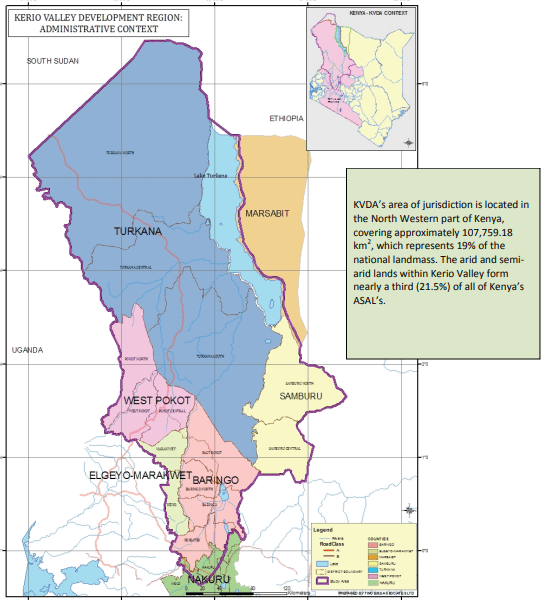 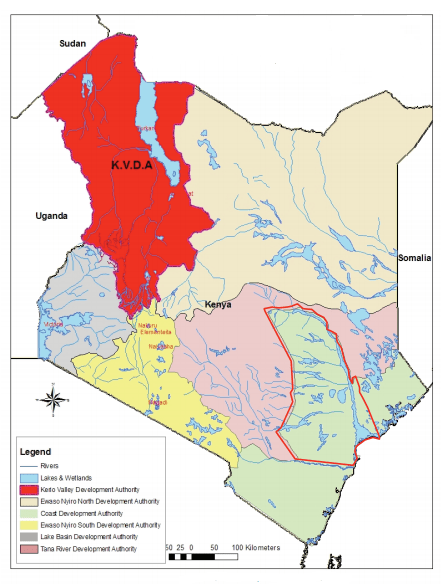 The Suam River Basin, covering an area of 5,900 km2, stretches down from Mount Elgon to the Turkwel Gorge. The basin is drained by the Kanyangareng River from the North-West and by the Suam River from the South-West. Flow regimes of the Suam River at Kongelai and on the upper Suam are good throughout the year with two to three relatively dry months.

There are two peak flow periods, May and August, corresponding to the wettest months. January to March is a relatively dry period and hence there are low flows in these months. The melting of snow on Mount Elgon from August to December increases the base flow in the upper section of the Suam River.

The Kerio River originates in the Metkei and Timboroa area North-West of Eldama Ravine. This mountainous forest area at an approximate elevation of 2500 m above m.s.l. receives abundant rainfall of over 1400 mm annually.

The Kerio River flows more than 400 km to the North- East before discharging into Lake Turkana. The total catchment area covers about 14,172 Km2.

The Elgeyo Escarpment and the Cherangany Hills further North receive at higher altitudes abundant rainfall of over 1200 mm annually and the area densely forested. At the valley flow, rainfall is fairly constant at 800-900 mm per year.

The only perennial tributaries are the Torok, Arror and Embobut rivers.

The catchment area of Lakes Bogoria and Baringo cover approximately 4,835 km2 of very heterogeneous land. It is drained by four major river systems: the Perkerra, Molo, Endau and Waseges rivers.

The sub-catchment area of Lake Bogoria (at an elevation of 990) covers about 1,120 km2 which is drained by the River Subukia, which in turn becomes the River Waseges downstream. Maximum monthly flow values occur in May and August and are quite closely related to the distribution of rainfall in the region of Maji Mazuri and Marigat.

The mean annual rainfall around the Lake is 550 mm while the mean evaporation is estimated at 2,320 mm per year (Sogreah, 1982). The mean inflow calculated over 12 years (1951, 1956, 1957 and 1969-77) is 247 mm3. The solid transport of the rivers into the lake is estimated at 5 mm per year. Consequently, the shallow lake may be filling with sediments and the high evaporation rates causing an increase in the concentration of salts.

The Kerio and Turkwel Rivers contribute less than 10% of the total water discharge into the lake, although they comprise 30% of the Turkana drainage area. With the Turkwel dam, the effective Turkwel/Kerio catchment area draining to the lake is 41,700-5,900=35,800 km2 (Sogreah, 1982).

This river rises in the Ethiopian highlands where rainfall increases with altitude and annual rainfall is overall much higher. Hence the Omo River is the principal source of water and water-borne sediments, nutrients and minerals entering the lake. The chemistry of the lake is thus mainly governed by the Omo River water quality, as stated earlier. Any changes in the quality and quantity of the Omo River waters will thus, directly affect the lake ecology. It losses water through evaporation since it has no outlet. The estimated evaporation rate is 2,335 mm/year-1 (92 in/ yr-1). River Omo`s mean annual discharge derived from L. Turkana levels, varies from 1993 – 2008.

The Suguta River Catchment extends over an area of 12,900 km2 in a South-North direction between the Kerio River Basin to the West and the Ewaso Nyiro River Basin to the East. It is bordered on the South by Lake Baringo and on the North by the hills around Teleki Volcano which prevent the river from having an outlet towards Lake Turkana.

The basin of the River Suguta drains a semi-arid region where rainfall decreases from 800 mm in the South to 300 mm in the North (Sogreah 1982). The lower part of the basin, called Suguta Valley, is surrounded by lava plateaus and forms a marshy and sandy zone.